If you are reading this article, chances are you already know a thing or two about mid-century modernism. We want to bring back some topics from our previous articles this 2019 in order to appease those audiences that are just getting to understand the different styles and tenets of interior design and furniture. The Mid-century modern style, in particular, is our banner and inspiration, and we’re proud to be able to furnish America with quality replicas inspired by the works of the best designers from that period. Our Eames Lounge chair with ottoman, particularly, has been awarded number one on the Houzz portal. Other best-selling items in our catalog include a gorgeous replica of Eero Saarinen’s Womb chair, the Eames Aluminum Group office chair, and Saarinen’s Tulip Table. The mid-century modern style of furniture has something for everyone, so here are 5 key elements of this style that might help you get a quick sense of what it’s all about. 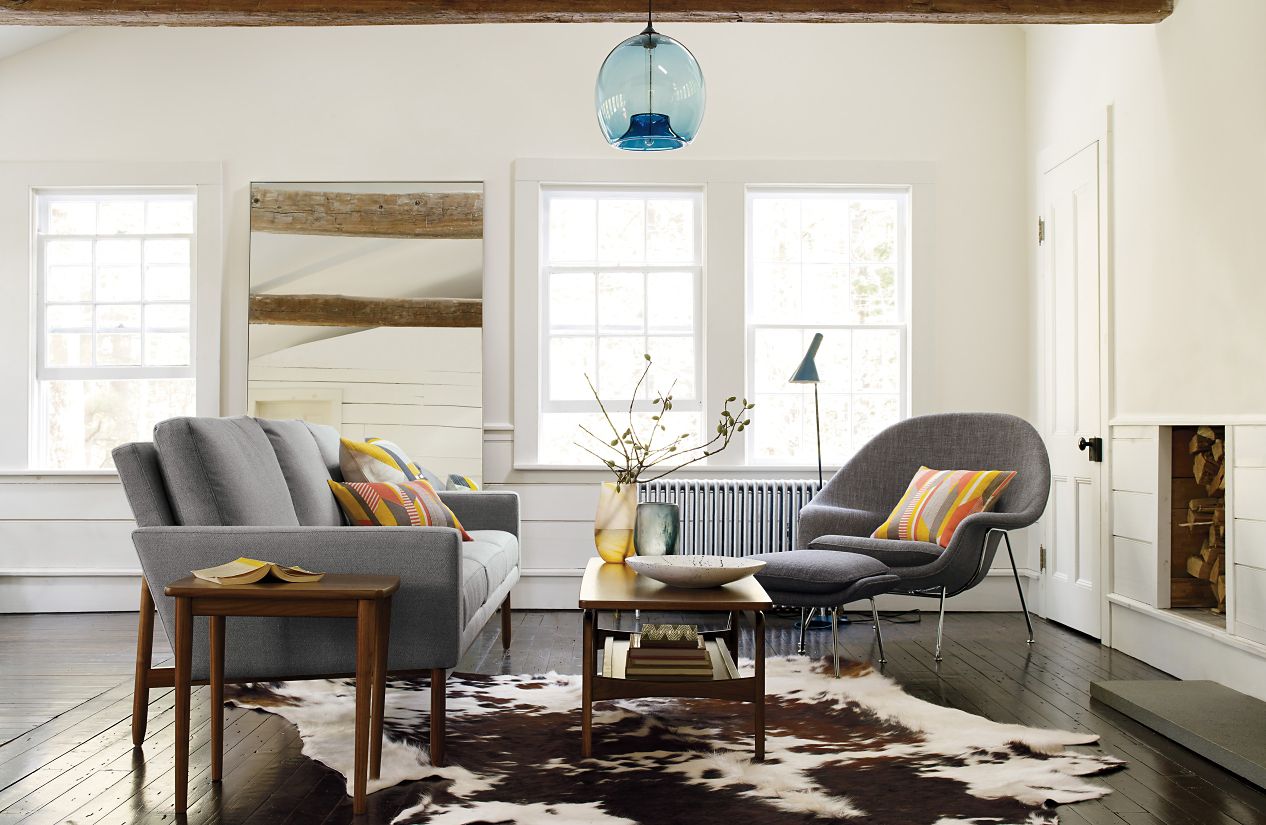 The style from the 1950s and 60s originated from the work of the Bauhaus designers in Germany and other influences like the international Arts and Crafts Movement from the beginnings of the 20 th century. A mixture of influences and a certain focus on functionality and versatility, which probably came from the aura of the Industrial Revolution, led certain designers to create furniture that was minimalist, meaning that it didn’t have elaborate ornaments on the frames, cushions, or even patterns on the upholstery, etcetera. There was a focus on cleaner lines, neutral colors, and a certain sleekness that’s characteristic of mid-century modernist pieces. Two great example of the sleekness of mid-century furniture are our Noguchi table replica, and also our Eames plywood chair replica.

Following along with this line of thought, we can also appreciate that mid-century designers had a thing for geometry, which is also a way of returning to the most basic elements of design, and shedding ornamentation, in order to favor both functionality, versatility, and aesthetic. This is why rectangular, circular, and triangular shapes are very, very noticeable. And you can also find diamond-like shapes, cylinders, and cubes, but you will seldom find more elaborate shapes than these. This kind of approach to geometry is key to understand the natural feel of this furniture, which is what the designers intended (most of them). The Arco Lamp, inspired by the original design by Achille Castiglioni, is a very good example of the modernist take in geometry. Just a solid marble cuboid, a circular base, and a sleek curved neck that binds the two of them together.

Some mid-century designers attempted to copy shapes and ideas from the natural world. For example, consider the following chairs’ names: Womb chair, Ox chair, Egg chair, Diamond chair, and Bubble chair. These are all made by different designers. What do they have in common? They were inspired by a particular element of nature. Along with the choice of geometric shapes (also an attempt to return to nature), this particular brand of design is called ‘biomorphism,’ which simply means trying to make something that resembles life itself. The Eames Lounge chair, though not really biomorphic, was said to have the feel and shape of a “well-used first baseman’s mitt.” The Arco Lamp mentioned above was reportedly inspired by a tall European streetlight from the 20 th century. These could also be considered examples of biomorphism, to some extent. 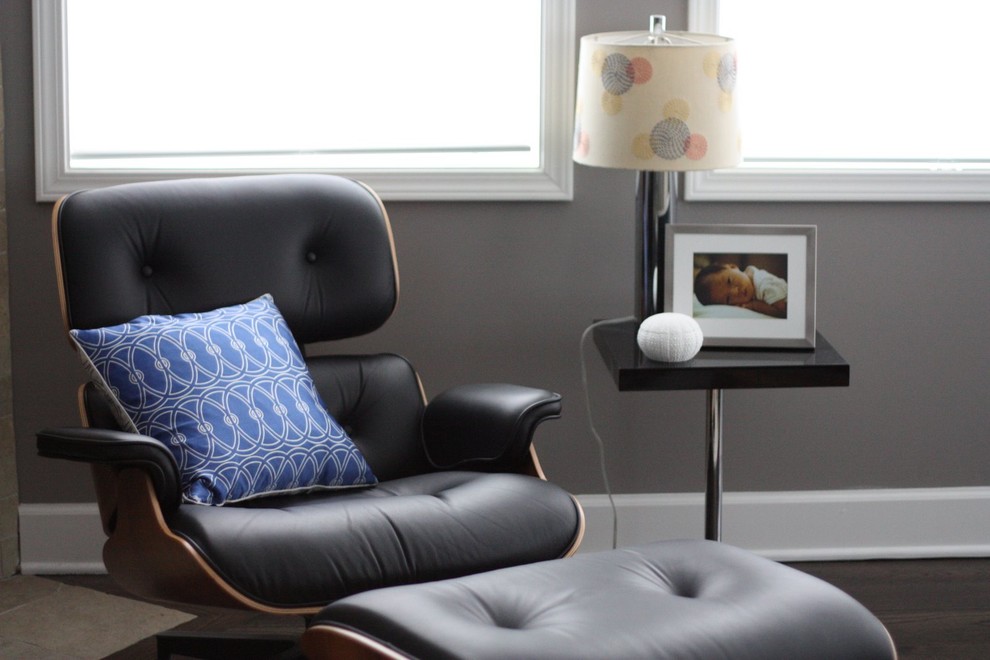 Experimentation was key to achieve what these designers wanted from their furniture. In order to make this nature-inspired items functional and beautiful at the same time, they had to try and combine different elements whose properties could let them do that. The hardness of the steel with the flexibility and durability of leather, for example. The softness of wool with the moldable sturdiness of plywood or fiberglass. Mixed materials are very, very noticeable on mid-century furniture, and they end up adding to the overall aesthetic of the final products. The perfect example would be our replica of the Halyard chair by Hans Wegner, which is also on our best-seller list. 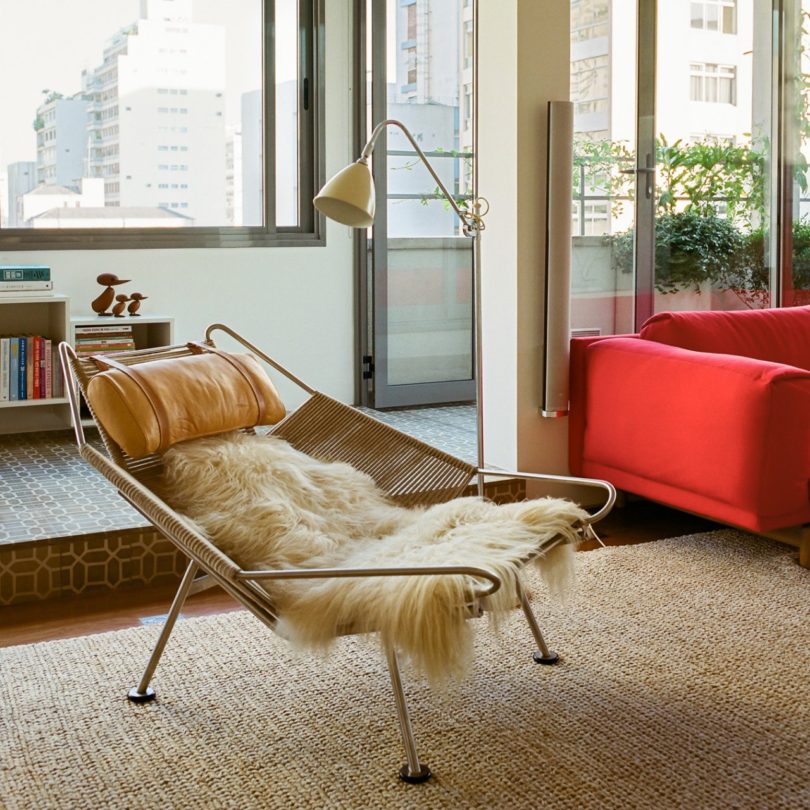 Remember the names we mentioned above in point number 3? The designers of those chairs are, in order: Eero Saarinen, Hans Wegner, Arne Jacobsen, Harry Bertoia, and Eero Aarnio. They are only five designers from a myriad of hard working men and women who made mid-century furniture timelessly appealing, functional, and groundbreaking. Not only we pull from the works of a long list of furniture geniuses, as you can see, we also recreate more than one piece, usually. For example, in the case of Charles and Ray Eames (America’s foremost mid-century designers after Florence Knoll), we also have a replica of their La Chaise lounge chair, their rocking chair in fiberglass, a set of dining chairs inspired by them, and many others. Other best sellers include a replica of Arne Jacobsen’s Swan chair, and George Nelson’s famous 70-inch bench.